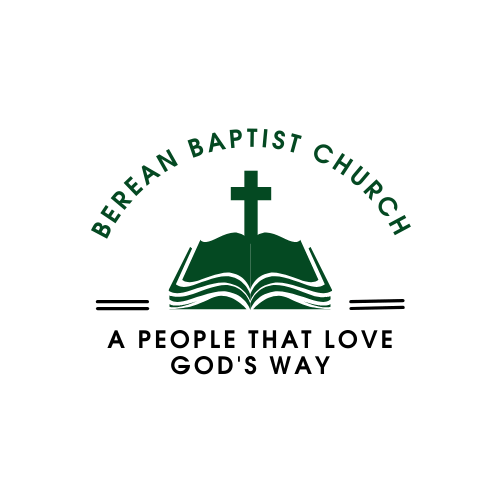 GREETINGS FROM OUR PASTOR

As the Pastor, it is my responsibility to serve the people that God directs here. Therefore, it would be an honor if God were to allow me the occasion to minister to you. Over the years, I have seen many changes take place that have affected every facet of our lives.
With all of the informational technology that exists, you would think we could find the answers to any questions imaginable. Sadly, most Americans are still looking for a lasting peace and joy that can never be found in the relationships and riches of this world.
Here at Berean, we believe Jesus Christ has the answer for all of man’s problems, as well as the key to eternal peace and joy.
On behalf of our people, please accept my invitation to attend our services and see for yourself the love of God at work. We look forward to seeing you.

I was born and reared in Wilmington, NC to hardworking parents who divorced when I was only three years of age. Living with my Jewish mother and grandmother brought many moral teachings into my life. Yet, I did not know or believe in Jesus Christ until age 15. Graduating from New Hanover High School in the mid 70’s, I first attended N.C. State University for engineering and transferred to Bob Jones University for teaching mathematics. This is where I met Karen Call who would become my wife. We both graduated with mathematic education degrees and began teaching in a Christian school located in Northern Virginia. After 24 years of teaching and having two children, the Lord worked in my heart to seek the pastoral ministry. In 2002, the Lord moved us to Forest Hills, West Virginia and allowed me to pastor Countryside Baptist Church. At this time, I entered distance learning through Liberty Theological Seminary, earning a Masters of Divinity 8 years later. Through various people and events, the Lord directed us to Berean Baptist Church in 2005 as their pastor. It has been a great joy to serve the Berean family, growing in our love for one another and sharing that love with our community. Karen is very active in ministry roles with Berean and teaches math at West Florence High School. Our son is married and works in Savannah, GA and has 2 boys. Our daughter is a pastor’s wife in Tucson, AZ and also has 2 boys.

Dr. Stephen Dersch was born and raised in Muncie, Indiana. He trusted Jesus to be his Savior and was baptized as an elementary student. He grew up serving in the music and bus ministries of his local church. He attended Bob Jones University in Greenville, SC where he received a BS in Premed and an MS in Counseling. The summer after their first year of college, Stephen met Suzanne Pait (from Bladenboro, NC) while they were both working at the Wilds, a Christian camp near Brevard, NC. He loved her almost immediately; she… took some persuading… but eventually came around (praise the Lord!) and they were happily married in 1995.

After Stephen finished medical school back in Indiana, the Lord unexpectedly brought Stephen to Florence, SC for a three-year Family Medicine residency at McLeod Regional Medical Center. When Stephen, his wife Suzanne, and their 6 month-old daughter Millie moved to Florence in 2000, God providentially introduced them to Berean Baptist Church, which at that time was not much older than Millie and was meeting in the cafeteria at Sneed Middle School. The Dersches joined Berean and served there throughout Stephen’s residency, excited for the opportunity to be a part of the young church. When Stephen finished residency—God having knit the hearts of the Dersches to the people at Berean—they stayed in Florence to be able to continue to serve and be a part of the church.

Stephen & Suzanne were asked to lead the youth ministry at Berean in 2003. Later in 2003, the Church appointed Stephen to an Interim Leadership Council after a challenging time when our church lost most of its leadership. In late 2004, the church installed Stephen as an Elder, in which capacity he has served ever since. In 2005, he assumed responsibility for being the worship and music leader for the church.

As an elder, Stephen currently oversees the Youth and Music ministries. Although Stephen & Suzanne are still actively involved in the Berean teen group, they have turned over most of the day-to-day responsibilities to a younger couple, Patrick & Anna Beam, with whom they work closely. Suzanne leads our summer Wednesday evening children’s ministry for 3K-6th grades and co-leads our women’s ministry with one of our Deacon’s wives, Frances Lynch. Stephen plans Sunday worship services, leads congregational singing, and co-teaches the adult Sunday school class with another Deacon, David Lee.

Outside of time spent in ministry at Berean, Suzanne holds things together at home while Stephen works as a Hospital Medicine physician at the Medical University of South Carolina Florence Medical Center, where he also works as a Physician Advisor for the Case Management department and as an inpatient hospice physician for Amedisys Hospice. He also serves as the chairman of the Bob Jones University Science & Engineering Endowment steering committee and is a physician with Operation Renewed Hope, with whom he takes short-term medical missions trips 2-3 times a year. Linked here are videos that Operation Renewed Hope and Bob Jones University have done where Stephen talks about the opportunities he’s had serving in medical missions.

God has blessed Stephen & Suzanne with three wonderful daughters. The oldest, Melinda, recently graduated with a Bachelor of Science in Nursing from Bob Jones University. Stephanie is a Junior Nursing major also at Bob Jones. Gracie is a senior in high school.